Home
Dog Stories
Two Hugging Dogs About To Be Euthanized, Saved And Adopted

If a picture can express and paint a thousand words, a photo can also save lives!

The photo of Keira, a one-year-old boxer mix, and Kala, an eight-month-old hound mix were seen hugging each other, became viral on Facebook and saved their lives. The two dogs would be put to sleep if no one would adopt them by the end of the day.

These two dogs are at an animal shelter in Georgia when the photo went viral. An adoption coordinator in Etowah Valley Humane Society took the picture. Said photo was posted at Angels Among Us Pet Rescue’s Facebook page. Thousands of people liked and shared the said photo. 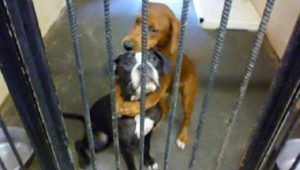 Two hours after the photo was posted, the concerned citizens were able to raise money enough to rescue the two dogs. The funds raised were able to cover the dogs’ medical expenses.

Thanks to the viral photo and concern, the dogs were saved just in time!

Eventually, a volunteer fostered the two dogs while waiting for someone to adopt them. The two dogs are growing up happily and healthily.

After three months from their foster home, Kala and Keira were able to find their forever home!

Best friends and roommates, Wendy and Pam, decided to adopt Kala and Keira for good.

Wendy has been following the story of Keira and Kala. Wendy’s two elderly dogs just passed away, and after learning about the story of the two hugging dogs, she can’t help but make a call.

Wendy’s sadness from losing her dogs was replaced by a smile when Keira and Kala came into her life.

Wendy and Pam are planning to put up a Facebook page to update everyone about the hugging dogs and to help Angels Among Us Pet Rescue to raise funds.

Continue to inspire, Keila and Kala!

Thank you, Angels Among Us Pet Rescue Facebook page via Dog Time and Bored Panda for these cute photos of Keira and Kala!

Sometimes, heroes are those who are most unlikely to be …

There are several challenges that come with rescuing dogs. For …

Welcome to Limelight Dog. This Website is for ALL dog owners, especially the parents of the seven breeds of Bichon. Whether you are the proud parents of a:- 1. Bichon Frisé 2. Bolognese 3. Maltese 4. Löwchen 5. Bolonka 6. Maltese 7. Coton de Tuléar or someone who’s seriously thinking about buying or adopting a Bichon, you are most welcome to join and engage with our community. Our Website promotes “ADOPTION” rather than newborn. We are therefore proud and privileged to support The Bichon Frisé Rescue Centre of Northern New Jersey http://www.bichonrescuenj.com/ by donating 5% of the annual net profit from the proceeds of sale from all that is sold from: 1. This Bichon Family Facebook Page: https://www.facebook.com/TheBichonFamily/ 2. The Bichon Family Facebook Group: https://www.facebook.com/groups/thebichonfamilygroup/ 3. The Bichon Family Boutique website: https://thebichonfamilyboutique.com/ What should you do now? If you want expert tips and advice on the care and welfare of your Bichon? Join our FREE Facebook Group here: https://www.facebook.com/groups/2199783476907491/ Feel free to SHARE this with your fellow Bichon lovers, friends and family… THANK YOU! in advance, for your contribution to the ongoing success of our Social Media presence.

Our website is made possible by displaying online advertisements to our visitors. Please consider supporting us by disabling your ad blocker.